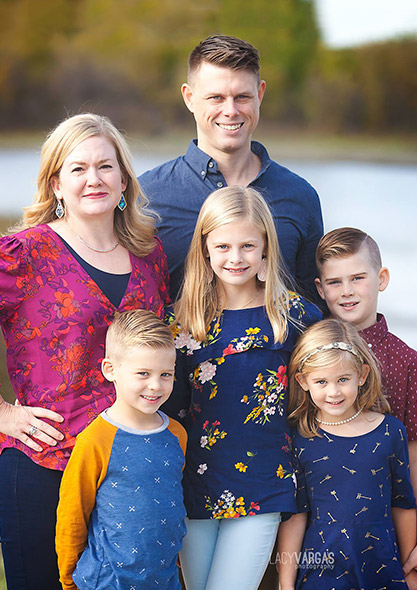 Michael Rowntree has been a pastor at Wellspring since 2005 – the year after he graduated from the University of Texas (degree in Finance), and also, the year after he married Alicia Rowntree. Together, Michael and Alicia have four kids: Anna, Hudson, Will, and Molly.

Michael became the Lead Pastor in 2012, after being mentored for seven years by the previous Lead Pastor, Jack Deere. Jack took Michael all over the world, teaching people how to experience the power of the Holy Spirit and walk in friendship with Jesus. Since 2012, Michael has led the church more deeply into these realities, while also challenging the church to extend Jesus’ friendship—and ours—to the world around us.

Michael is also a co-host of Remnant Radio, which produces weekly videos on various theological topics with guests from a wide range of Christian orthodoxy. Videos from Remnant Radio have reached more than 2.5 million views.

Michael speaks Spanish, rides a motorcycle, plays the djembe, and laughs at everything (especially his own jokes).

What is your favorite family tradition?

My favorite family tradition is a daily one – over the dinner table, we share one thing we are thankful for and one thing that stressed us out from the day. Then, we turn those into prayers – saying “Thank You, Lord,” for the things we’re grateful for, and “Help us, Lord,” for the stressors we need help with. The reason I like this is not only that it teaches my children how to talk to God, but also, because it makes dinnertime discussion lively.

Who is your least favorite superhero and why?

It’s probably mostly because I don’t know anything about him. But Green Lantern. If the only thing that makes you “super” is your weapon, you’re not that super. If your weapon is a lantern, you’re even less super. The least you could do is have a flamethrower!

What is your favorite scripture/life verse?

Probably John 15:15: “No longer do I call you servants, because a servant does not know his Master’s business. Instead I have called you friends, because I have made known to you all the Father has revealed to Me.” The primary orientation of a servant is doing stuff, but the primary orientation of a friend is the enjoyment of each another. Before I met Jesus, I saw all religion as an obligation. But after I met Him, I realized that there’s nothing better on earth than knowing Jesus. And that makes me want to serve Him – not our of obligation, but out of joy and affection

If you were trapped in a zombie apocalypse and you were only allowed one weapon to defend yourself, what weapon would that be?

Since I’m a pastor, I should probably say that “prayer is our greatest weapon.” But I’d probably not be very holy in such a scenario. Realistically, I’d go with a flamethrower.