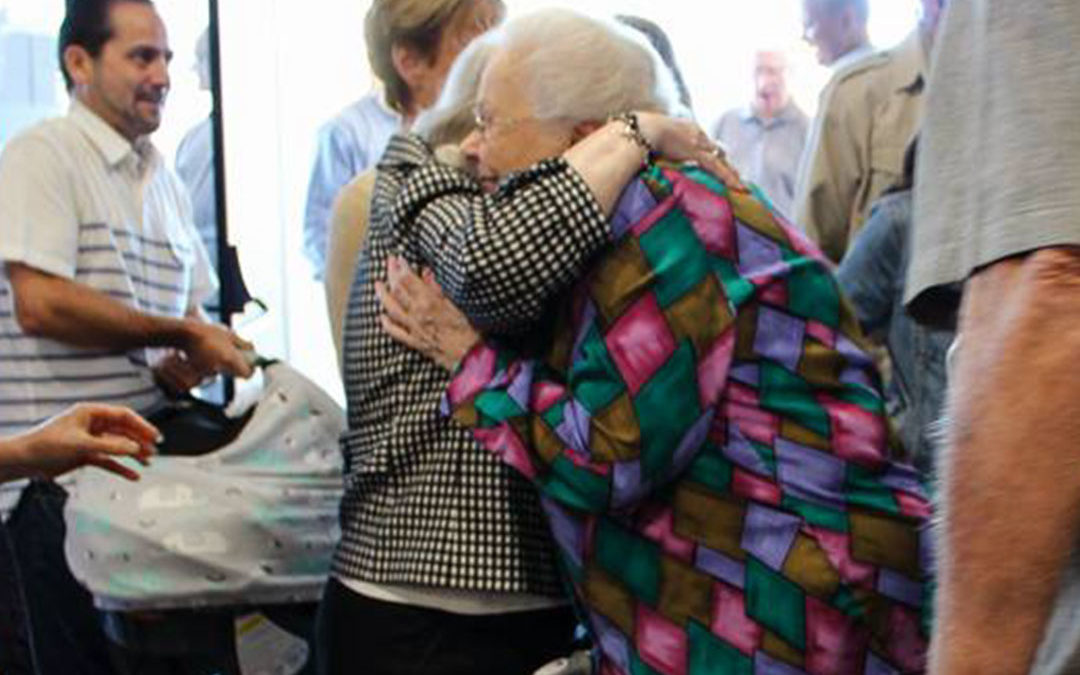 “The experience I had at church today was so healing for me.”

“I cried throughout the whole service.”

“[My wife and I] were both in tears… we felt like things were mended and that God has paved a new path, without Wellspring feeling any hindrances going forward.”

“I felt it in my bones that the Holy Spirit was doing a great work… I’m really excited to see how God’s favor on yesterday plays out in the future of our church.”

“You could feel the love and the presence of God!”

“I felt reunited with long lost relatives, and now I understand more of our identity. That place was alive! Excited to see how God blesses.”

** These are all statements that people made after the Sunday service on 10/28.

A Work of Reconciliation

There was a period in our church’s story where it didn’t seem like these things could be said. It was a season of tremendous division, loss, and heartbreak. Many churches endure painful “splits,” but ours was more of a slow scattering.

The reason for the scattering came back to the roughshod manner in which Wellspring stewarded hearts during a pivotal transition, when the name of our church changed from “Newchurch” to “Wellspring,” and the entire leadership of the church turned over.

But on October 28, 2018, God orchestrated a reconciliation between those who left and those who stayed. On that beautiful day, the founding pastor of our church, Gary Kirksey, was invited to speak at Wellspring. Before he spoke, I shared what I believed to be the prophetic significance of the day. I’ve written out what I said in italics below and added some observations at the end…

The Prophetic Significance of October 28

The fact that so many are here from the founding days of this church is a miracle of God to me. We invited Gary to speak, not in order to spark some kind of family reunion, but because God has been doing a work in Wellspring to restore us to our roots, to re-dig the wells that our fathers had dug. In an effort to “tap into” that spiritual heritage, we never envisioned 100+ people coming to hear their former pastor. Only God could orchestrate such a day.

To give you a little context for what sparked this movement within Wellspring to “restore our roots” and “redig the wells that our fathers had dug”….. it all started in the Spring, when we made a new hire. We hired David Hayes as our Youth and Young Adults Pastor. The Lord spoke to me at that time with these words: “David Hayes will be a bridge between Newchurch and Wellspring.”

The analogy made sense. David was literally born within two weeks of the day that Newchurch was born, to Bruce and Margaret Hayes, two charter members of the Newchurch community. Today Wellspring is enjoying the fruit of what Newchurch poured into David. He is a Wellspringer, but with Newchurch blood running through his veins. He’s a bridge.

As the leadership of this church has asked the Lord for further clarity regarding this word from the Lord, I’d like to share two things we believe God is emphasizing.

#1: Bridges unite what is otherwise divided. While almost all transitions are at least a little rocky, to call our transition from “Newchurch” to “Wellspring” rocky would be a massive understatement. One example of this is the way we changed the name of the church. We said, “We’re changing the name of this church because Newchurch is dead. It’s gone. It’s over. The new name is Wellspring because this is a totally different church with totally different DNA.”

Not only was this deeply hurtful to the hundreds of people who poured their heart and soul and time and money and energy into this house, only to be told (essentially) that it was all for naught…. Not only was it deeply hurtful, but it was also inaccurate. If I change my last name from ‘Rowntree’ to ‘Smith’ or ‘Jones,’ the new label doesn’t change my Rowntree DNA. In the same way, a new label – ‘Wellspring’ – didn’t change the DNA that’s been in this place since it’s founding in 1991.

This is just one overarching story that characterizes the insensitive and damaging manner in which we stewarded your hearts during a time of transition. The division we created during that time has never really been resolved, and that’s what today is about. God says He’s unifying what was otherwise divided.

What exactly does this mean? First, let me be clear about what it doesn’t mean. It doesn’t mean that I or God or anyone is suggesting you need to leave your church and come back to this one so we can be one big, happy family again. No, we are not appealing for that. The unity God speaks of is a unity-of-heart.

For unity-of-heart to occur, it requires two things: first, it requires the transgressing party to acknowledge the pain that’s been caused. We can’t just whitewash the past or sweep it under the rug. As a representative leader of Wellspring, speaking to many people who were hurt during that tumultuous season of our family history, I want to say publicly that I acknowledge your pain—that it was significant, and that it was Wellspring’s fault.

The second thing that must happen for unity-of-heart is not just an acknowledgement, but an apology. As a representative leader of Wellspring, I also want to tell you from the depths of my heart, I’m sorry. I’m sorry that that these divisions ever happened, and I’m sorry for Wellspring’s role in creating them. I wish I could make it right, but I can’t. The best I know to do is to say I’m sorry and ask for a gift of grace that we don’t deserve: your forgiveness.

#2: Not only do bridges unite what’s been divided; they also facilitate interchange. There are two sides to this interchange. First, there is the side of Wellspring to Newchurch. From Wellspring to Newchurch, there is the giving of honor. We honor you as our mothers and fathers, as the pioneers of this spiritual family that began not in 2004 when we changed the name, but in 1991, when you planted this church. We want you to know that not one ounce of your labor was in vain. All of it mattered both for eternity, and for us. On a personal level, I get to do what I love every week of my life, and I owe that to you. On a collective level, we get to see God healing hearts and bodies and transforming lives and making disciples and growing us in every way we can grow. We honor you for that because not one bit of it happens without you. From Wellspring to Newchurch, we honor you.

From Newchurch to Wellspring, I’m going to ask you once again for a gift of grace that we absolutely don’t deserve. As a representative leader of Wellspring, I’m asking you for the spiritual inheritance you toiled for in the Newchurch days. Just like unity is primarily something that happens in the heart, so is the passing along of a spiritual inheritance. If you release it in your heart, then it’s released.

So now, having humbled myself, I ask you: In your heart, would you receive our apology and bless this church that you pioneered?

Newchurch answered with a standing ovation. In that moment, I heard the Lord say in my spirit, “The inheritance has now been given.” After this, Gary Kirksey preached the perfect message about “passing the torch.” By the time he finished, everyone just about jumped out of their seat to praise God, and it was one of the most powerful worship experiences of my life.

As miraculous as this day was, the torch that was passed on October 28 would’ve never happened without a different passing – a tragic passing – on March 2. On that day, David Hayes’ father, Bruce Hayes, passed away suddenly. Remember, Bruce was a charter member of Newchurch.

The memorial service for Bruce impacted people in a way that was almost as unexpected as his passing. Former Newchurcher/Wellspringer Pam Lloyd captured our collective sentiment in the days after the memorial service with these words:

“It was the best of times, it was the worst of times. Today was one of those days.

Hundreds of hearts across Texas and beyond were crushed last week at the news of the sudden passing of our dear, dear friend, a godly man and great human being, Bruce Hayes. If the aliens were to land and select one human being to represent the best of the human race, Bruce would likely be a candidate. He used all his gifts and talents and powers to love and serve others, demonstrating the pure, giving love of God toward mankind. He lived the gospel he cherished before our eyes. He was a great man.

Flashback 25+ years. A precious family of believers steeped in community was born.  We grew into a thriving body of Jesus followers committed to relationship, doing life together in small groups in a way Quin and I had never experienced before. Nor since. Over the years, amidst change upon change and as way leads on to way, many of us were drawn in different directions, to other ministries and other applications of the gifts and truths we’d learned and fostered and honed together.

Today a large segment of that precious body of believers from ages past re-assembled to say goodbye to one of our own – to Bruce. To love on and support Bruce’s precious family, to remember the times we’d shared and the community we’d poured our hearts and souls into, to give and receive comfort, and to celebrate together Bruce’s life and the impact he had on each one of us.

Today I experienced a gathering of eagles.

And my heart soared.

I love you NewChurch and Wellspring families.

Why God took Bruce when He did remains a mystery for everyone who knew him. Hindsight is rarely 20/20. It rarely tells us the mysterious ‘Why’ we want to know, but sometimes…. sometimes we get the privilege of discerning the ‘How’ – as in, ‘How did God use this unexplainable tragedy for our good and His glory?’

Had it not been for March 2, there would have never been an October 28.

Pastor Gary reminded us on Sunday that the only reason we NEED to pass the torch is that our mortality demands it. As Bruce “passed the torch,” in some ways, to his son David… Newchurch passed the torch to its “son” Wellspring.

Newchurch blood runs through our veins.

On behalf of Wellspring, I want to say to our Newchurch mothers and fathers that we are overwhelmed by the grace you showed us this Sunday. We needed that grace to empower us for our leg of the race. No generation ever finishes the race; we only run our part. Now it’s our turn to bear the righteous burden you bore: of taking this torch further, and passing it on gracefully… when God says its time.