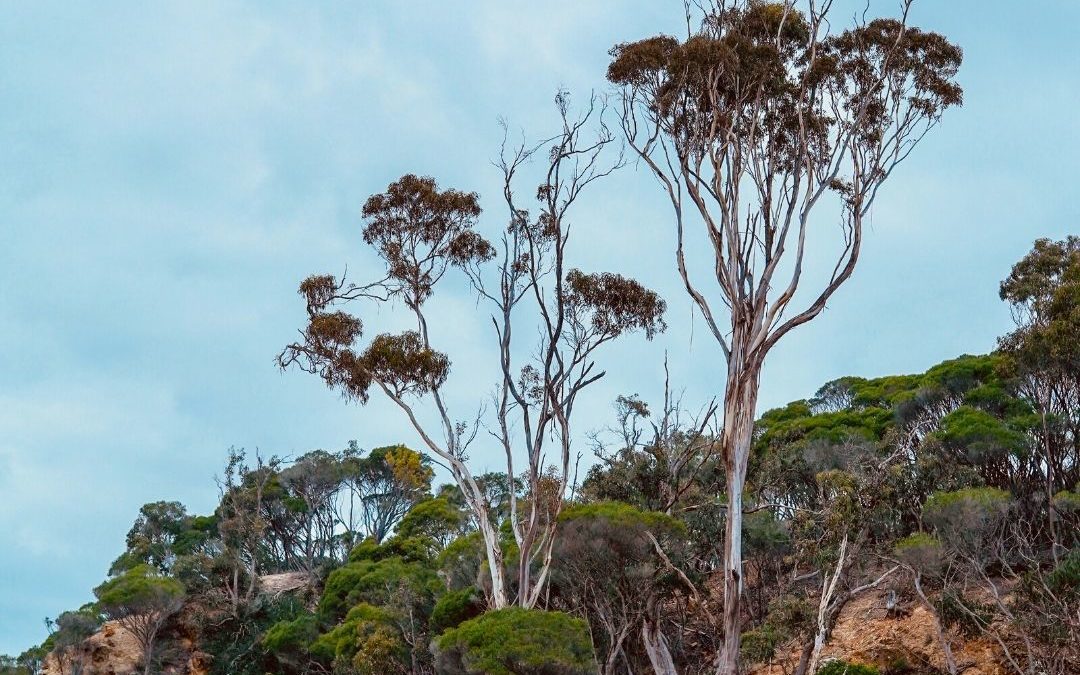 The House that Built Me

Two years ago, I was returning from a motorcycle certification course, when I decided on a whim to stop by the home I grew up in. I was taking a picture in front of the home [show pic] when the present owner saw me and asked what I was doing. This led to him inviting me inside and giving me a tour. This is a picture of the Murphy bed I slept on as a teenager [pic]. The entire house was virtually unchanged, down to the pencil markings on the door jam that showed how tall we were. [pic].

Have you ever visited the house you grew up in? It’s such a strange feeling. The word we use to describe that feeling is, “Nostalgia”. Nostalgia is that ache in your soul for something that once-upon-a-time defined your daily reality.

I bring this story up for two reasons. The first is because of what the world is now going through. After just one month, we all feel nostalgia for “the old normal.” We miss hugs and handshakes and water cooler conversations. We miss restaurants and waiters and predictable paychecks. We miss meeting new people and visiting old people. We miss worshiping together in-person. As we struggle to discover our new normal, we ache in our soul for the old one.

The second reason I bring up this story is that longing for restoration to “the way things once were” is built into the fabric of our DNA. Like a duck that longs for water or a bird for blue skies, God has placed within our hearts what I call an “ache for Eden.” Eden is the center of God’s original creation and our original home. It was a place that existed before sin, before struggle, before Coronavirus, and before death. Eden was a “garden paradise.”

Whether we recognize our “ache for Eden” or not, it’s there. Like a whisper you can barely hear, like a dream you faintly remember, something deep inside of us aches for home, for paradise lost, for that missing-something. This ache is actually healthy—it’s meant to drive us to God in the same way that hunger drives us to food. But too often it drives us to pain-numbing excess and mindless distraction—each, about as satisfying as scratching a mosquito bite.

Today I want to talk about the way Jesus’ resurrection answers our ache for Eden. Our passage for today is John 20:11-18. This is the story of Mary Magdalene (not the mother of Jesus), whose devotion is rewarded with the first visitation of the risen Christ. Let’s read:

11 But Mary stood weeping outside the tomb, and as she wept she stooped to look into the tomb. 12 And she saw two angels in white, sitting where the body of Jesus had lain, one at the head and one at the feet. 13 They said to her, “Woman, why are you weeping?” She said to them, “They have taken away my Lord, and I do not know where they have laid him.” 14 Having said this, she turned around and saw Jesus standing, but she did not know that it was Jesus. 15 Jesus said to her, “Woman, why are you weeping? Whom are you seeking?” Supposing him to be the gardener, she said to him, “Sir, if you have carried him away, tell me where you have laid him, and I will take him away.” 16 Jesus said to her, “Mary.” She turned and said to him in Aramaic,[b] “Rabboni!” (which means Teacher). 17 Jesus said to her, “Do not cling to me, for I have not yet ascended to the Father; but go to my brothers and say to them, ‘I am ascending to my Father and your Father, to my God and your God.’” 18 Mary Magdalene went and announced to the disciples, “I have seen the Lord”—and that he had said these things to her.

The Restoration of our World

The very first thing we see in verse 11 is a weeping Mary Magdalene. Both the angel and Jesus say to her, “Why are you weeping?” The repetition should catch our attention: the question is intended as a mild rebuke. She fails to understand that the prophesied day when every tear will be wiped away, in some real sense, had already begun. The resurrection of Jesus is the first domino to fall in God’s grand reversal of all that makes us weep. All violence, all cruelty, all evil, all death—Jesus absorbed each of these, visibly, on the cross. But instead of succumbing to them, He rose again. And in doing so, He rose above them.

This is why it’s no surprise that Mary mistakes Jesus for a gardener. It’s an allusion to the world’s original state of paradise. The world was broken by the sin of the first gardener (Adam); it will one day be restored by the resurrection of another “gardener” (Jesus).

The reason this is all relevant is that we’re told in every political cycle that if we just get the right political platform, the right economic system, the right party in office… we are destined for progress. The 20th Century alone should have destroyed that notion. We’ve had Republicans and Democrats, capitalists and socialists. Yet in spite of all our “progress” we saw nearly 200 million people die of war alone—some say that’s more than have ever died in every war in history. Our “progress” has seemingly just made us better at killing. Now here we are in the 21st century, hoping that a tweak to the world system will set things right. A microscopic virus is laughing at us. I’m all in favor of tweaks, but at the end of the day, our collective ache for Eden will never resolve by the efforts of dying men. Our hope is not in politics or politicians, but in the King of heaven, who launched His project for restoring the world through resurrection.

The Restoration of our Bodies

When Mary discovers Jesus’ identity, she understandably embraces Him. Jesus responds, “Don’t cling to Me, but go and tell My brothers what you’ve seen.” This not just a practical command to be on with her mission. It’s also a statement about the nature of resurrection, emphatic throughout this narrative. Jesus is not a ghost. He’s not a spirit. He could be touched. He could be hugged. He could be clung to. Jesus’ resurrection was physical.

Sadly, two-thirds of Americans think the word “resurrection” merely refers to dying and going to heaven. In the words of one Bible scholar, “That’s not the defeat of death; that’s the description of death.” Jesus defeats death by reversing it physically. This happens on the day Jesus returns to fully restore our two homes: the world we live in, and the body we live in.

On several occasions I’ve said goodbye to people on their death bed. I can remember that final squeeze of the hand while it still feels warm. Those final words. That final locking of the eyes. That final moment of closure as the casket is closed and then lowered into the ground.

It’s heartbreaking to see people all over social media talking about their final moments via Zoom and FaceTime. Their inability to squeeze a hand or truly lock eyes or even hold a funeral. There’s something about human physicality that makes us fully human. Without it, goodbye doesn’t feel like goodbye. God made us to be more than pixels on a screen. Your longing to be with people again is something like the biblical hope of resurrection. We are human beings with fingers and toes—made to shake hands and to hug and to worship in big rooms with collective voices and outstretched arms. These are the activities that make us fully human. And that’s what resurrection is about. It’s about the restoration of our full humanity—body, soul, and spirit—so that we never have to say goodbye again. Just one eternal hello and a fully human sharing of life.

Now let’s discuss the third restoration: the restoration of our relationships.

The Restoration of our Relationships

That’s what makes Jesus’ statement in verse 17 so triumphant: “I am ascending to My Father and your Father, to my God and your God.” It’s the first time in all of John’s Gospel where Jesus refers to God as “Your Father.” Through Jesus’ death, our sin was paid for. Now, through His resurrection, our relationship with God can be restored. This, then, becomes the foundation for restoring every relationship. Why? Because we all worship the same Father, by the same blood of Jesus, and by the same Spirit. In Christ, it’s not just individuals restored to God; it’s God’s entire household. This is why Jesus tells Mary, “Go and tell My brothers…” (v. 17).

And now this brings us to the million-dollar question: Are you right with God? Before God makes restores our two homes, He wants to restore our hearts to Him. Every relationship is a two-way street, and God has done His part. He’s chased us all the way to the grave and back again. Now our part is to respond to God with faith and repentance. Again, I ask: Are you right with God? Or are you satisfying the ache in your soul with pain-numbing excess and mindless distractions?

The House That Built Me

I’d like to finish with the lyrics of a former #1 hit by Miranda Lambert about visiting her old childhood home, called, “the House that Built Me.” It goes like this:

You leave home, you move on and you do the best you can

I thought that maybe I could find myself…

Why would Miranda Lambert feel that by returning “home” and touching it, she might restore her lost self? Logically, this doesn’t make much sense, but spiritually it makes tons of sense. She’s responding to a hunger God placed in her DNA… that “missing-something”… that longing for restoration… to her ache for Eden…

Whatever you’re chasing—that promotion, that high, that relationship—won’t help you find your lost self either. Lost sheep can’t find themselves, and neither can lost people. Jesus says, “I came to seek and save the lost.” How did He do it? He came, He lived, He suffered, and He died.  For three long days He made His home in the grave, so that for all eternity we could be at home with God.